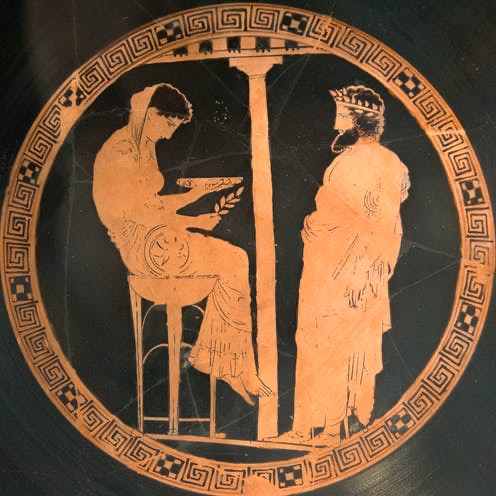 In more ancient times (and, still, considered to have validity by some who work as healers)both physical and mental illnesses were recognised as emerging out of any of four very different origins. In ancient Greek mythology (which, often, carries more truth in it than some religions, Asclepius ( a son of Apollo) was the god of medicine; and whose daughters followed in his path.

I was thinking about this, as I wandered through Epidaurus, set in one of the smaller valleys of the Peloponnesus, where lies his shrine. And how I’d got here from what an insurance company had given me, for my pains, having had my hand damaged in a car accident. His Sanctuary, surrounded by the awesomely beautiful landscape (feeling so familiar) still retains its original powerful atmosphere: and, since its dedication, in the 2nd Millennium BCE, is one of the best preserved monuments in Greece.

“Being Struck Down,” in those times, had more to do with retribution from the gods (in a kind of divine justice) or (perhaps) from demonic forces. Maybe a Sorcerer was involved.. and these three being considered, before being put down as ‘natural causes.’ If you were REALLY unlucky then ( and heaven help you!) it could be all four. Whatever, they had a way of accommodating every prognosis.

Initially, for ceremonial healing practices, Epidaurus was to develop into the most influential therapeutic healing centre, in the ancient world, offering free treatments to all who managed to survive their long and arduous journeys. Some might say that the journey, by itself, was a part of the process. When I lived on the Island of Skye I learned of a man (suffering from a chronic muscular degenerative illness) who had walked (as much as possible, given the terrain) around the whole of its perimeter (a distance of close to 400 miles)with the intention of healing himself. Which he had: which just goes to show that, when the Mind and the Body are properly aligned with their intentions, anything is possible.

So, how did it begin, this Business of Healing?And, indeed, just what is the purpose of Human Suffering, when so much is at the root of ignorance, social structures and from various shenanigans? Well, get ye to the books helves, to read Homer’s ‘The Iliad,’ and ‘The Odyssey’ where (interspersed between those epic battles) can be found information about ancient Greek medicine: and so reminiscent of the leaps that modern medicine has made out of battlefield agonies.

And, here, I’m reminded of the inspiration coming out of the unbearable grief borne by Greek warriors, at their homecoming, and witnessing of so many absences. That had been when one of the goddesses had offered measures of Opium, so that they might forget, for while. In a modern context, so it was that the Poppy became a symbol of Peace.

And, if you continue reading, you’ll discover references to the descendants of Asclepius (The Asclepiads) who had inherited his divine healing powers: and who (as ‘demiourgio’) were to offer apprenticeships, in their medical schools. It was from one of these, on the Island of Kos, that Hippocrates (to become known as ‘the father of medicine’) emerged, and to create the memorable oath to be voiced by aspiring doctors:

“I swear by Apollo the Healer, by Asclepius, by Hygieia, by Panacea, and all the gods and goddesses, making them my witnesses, that I will carry out, to my ability and judgement, this oath and this indenture.”

Now, consider this: should it, also, be an obligatory one for all who work in the pharmaceutical companies, making such vast sums from sources so far removed from the natural world?

At Epidaurus, the sick had to undergo a Ritual of Purification, and to spend time in an inner sanctum, where they would await a vision from the god; and a healing process best suited to their recovery.

The Museum houses many records of healing (some of which may not appear as convincing as others) but, as some seem to have suffered mental distress and hysteria, who is to say they hadn’t been much helped by the psychotherapies on offer? Over time. this place of compassionate (and entirely free) centre had grown into a large complex of guest houses,baths, gymnasiums; and sanctums that offered relief from all kinds of trauma. Isn’t that what medicine should be all about? For the love of it, and not for profit? And, isn’t it about time, we went back to how it all began?

As I stood, thinking about all of this, among the vibrant ruins that, still, resonate with its magnificent and inspirational history, there was a sudden flurry of wings from above; and a loud cry from a Raven. “Ah!”said our guide.”That is the Mother of Asclepius, still looking after her son’s Sanctuary.”

Many myths and legends are recalled in many different ways, by many different cultures but they, still, hold to an essential truth. Which, for me, are beautifully summed up in the words of Joseph Campbell:

“It would not be too much to say that myth is a secret opening, through which the inexhaustible energies of the Cosmos pour into human cultural manifestation. Religions, Philosophies, Arts, the social forms of primitive and historic Man, prime discoveries in science and technology, the very dreams that blister sleep, boil up from the basic, magic, ring of truth.”

And if (as Joseph Cotton said) “The Mind is capable of Everything,” the only Thing we have to do (be it building, or being healed) is to do what William Wordsworth said: “To Begin, Begin.” Which, sometimes that means going back to the ‘Beginning’ of Things, in earlier times; and to create a better version, out of that original vision.

It was Nicola Tesla who spoke, for many of us when he said: “If you want to find the secrets of the universe, think in terms of energy, frequency and vibration.” He also said that ” The day Science begins to study non-physical phenomena, it will make more progress, in one decade, than in all the previous centuries of its existence.” And by ‘Science,’ he meant those who seek a truth (which, in earlier times, when religion held sway, would have them being put to the stake) and not the manufactured theories that keep them safe from the criticism of their peers.

Energy, Frequency and Vibration: therein lie the cruxes of healing the dissonance in the Soul, the dis-ease in the Body; and an inner sense of damnation in the Mind, generating a mental reaction. This is what I brought back with me, from Epidaurus: all over the World are the ruins of sacred sites, once dedicated to healing and awaiting their regeneration. The Big Thing about Change is that it doesn’t have to take generations for that to happen.

And here. in the words of Socrates is something that more of us need to take on board: “Know Thy self: the unexamined Life is not worth living.” For, in those who are fearful of doing just that, lie the roots of what ails them.

The wisest of words don’t have to be uttered by philosophers, but by those who have walked their talk and, for me, these summed it all up: “You either do it, or you don’t do it: and, if you choose not to do it, nobody else is going to do it for you.”